We had some exciting new products featured from the Eurobike Trade Show 2017 in our previous article, read on to find more exciting launches from this year’s show.

The Road RC SL features a full carbon sole with a ‘Corecell’ foam sandwich construction for a blend of stiffness and comfort. Your chances of a good fit are improved through an adjustable insole and BOA closure system, while the carbon fibre-reinforced fabric outer helps keep weight low. Also, Scott have launched a new Foil Disc aero road bicycle. The frame itself looks remarkably like its rim brake cousin, except the front fork has been completely redeveloped to consider the unique demands of disc brakes. As a result, there is extra material to balance out the asymmetrical braking forces, while Scott have also introduced a new narrower profile and a one-piece design around the front calliper to smooth airflow over the component. A smaller counterpart on the other side helps keep airflow not only controlled in tandem with smart internal cable routing, but also balanced as it passes over the frame.

Schwalbe’s range of gravel rubber has been expanded to include the G-One Bite, which sits alongside the existing G-One Speed and G-One AllRound tyres. The G-One Bite has a grippier tread pattern and will be available in two sizes: 700x40c for traditional road wheels and a 27.5×2.10″ version for the 650b wheel size emerging on the gravel scene. The 700c tyre has a slightly thinner MicroSkin sidewall construction but both tyres use Schwalbe’s top-end OneStar triple compound. As an aside, the G-One AllRound is now available with tan sidewalls and, well, that’s always a good thing. For cyclo-cross riders, the 33c Schwalbe X-One Speed is also new and combines a fast-rolling centre tread with a more grippy outer edge. The X-One Speed is also tubeless-ready and, once again, has a triple compound construction.

Merida launched its most versatile road bicycle, ever – The Silex. It is claimed to be a touring, bike-packing, gravel, commuting road bicycle all rolled in one – versatile? We think so! Merida will offer the Silex frame in two versions: as a carbon fibre chassis with a claimed weight of 1,050g, or an aluminium frame which comes in at a claimed 1,500g. Both are matched with a 500g carbon fork and are characterised by a geometry inspired by the mountain bicycl world. Five sizes will be available (XS to XL). Merida will offer the Silex in eight builds. Three will be based around the carbon fibre frame, with SRAM Force 1, Shimano Ultegra and SRAM Apex 1 drivetrains respectively, while five will use the aluminium frame, dressed in Shimano Ultegra, SRAM Apex 1, Shimano 105, SRAM Apex 1 (this time with a Sunrace cassette, FSA Gossamer chainset and mechanical disc brakes) and Shimano Sora. All will come with 35mm semi-slick tyres co-developed with Maxxis.

The introduction of the flagship S-Phyre RC9 and second-tier RC7 shoes at last year’s Eurobike saw Shimano use BOA dials on its footwear for the first time. Now the RP9 and RP5 shoes have received the same treatment, swapping the existing ratchet strap for a BOA dial apiece. The RP9 is made from microfibre upper with perforated vents for breathability. One can also get a carbon sole, a single BOA dial with a velcro strap and, a claimed weight of 224g per shoe. The RP5 swaps in a synthetic upper and carbon-reinforced nylon sole. Claimed weight rises to 275g per size 42 shoe. Described as a ‘multi-surface’ shoe, the XC5 looks spot on for style-conscious gravel riding. The contrast laces also have a strap running over the top to keep them in place. Otherwise, the shoe has a perforated synthetic leather upper, a grippy Michelin sole and optional spike mounts.

Garmin launched its new flagship Edge 1030 cycle computer at the Eurobike 2017. The new unit boasts a range of new and improved features, including new ‘Trendline’ tech that allows the unit to consult Garmin Connect’s billions of previously uploaded miles to recommend a route with your riding preferences in mind. You also get a refreshed user interface for easier operation and personal statistic tracking and recall, as well as improved integration with a smartphone that allows easy responses with pre-loaded responses, or pass on vital ride information to fellow riders if using the GroupTrack function. Additionally, a new graphical interface allows users of Strava Live Segments to view in real time where they are on a segment in relation to their own PR, as well as their chosen ‘competitor’, while also showing what lies ahead in terms of gradient and distance. 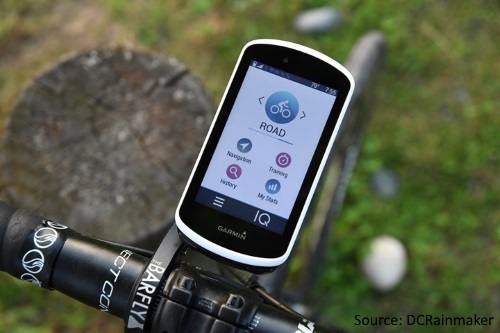 When it comes to bike shows, there is an unbelievable, whole new range of innovative tech, mech and components launched with numerous products on display, each being as impressive as the nest one. We have picked this compilation of highlights from the 2017 Eurobike Trade show, with the Indian cycling market in mind. Does your top pick feature in this list?