Perhaps the most exciting news from this year’s Eurobike, was the announcement of the Bianchi and Ferrari debut collaboration bicycle. The bicycle is a SF01 which is primarily a Bianchi Speciallisima, with numerous customized components, and the frame is claimed to weigh a mere 780 grams. Bianchi officials have said that the partnership with Ferrari is intended to expand into a full line of road, mountain, city and e-bikes, with engineers and designers from both companies contributing. The companies are also working on a collaboration triathlon bicycle, the basic design of which was displayed at the show.

After DT Swiss presented their entirely revisited high-end wheel portfolio last year, the Swiss manufacturer is now presenting a more affordable wheel line. The hubs are based on the popular DT 350 and the rims are pinned to save on production costs. For the use on trail bicycles the M 1700-wheels are available in three widths: 25 mm, 30 mm and 35 mm. The M 1700 SPLINE wheelset weighs in at 1822 g for the 27,5” version and 1915 g for the bigger 29” option, only about 150 g heavier than the DT top of the range model, the XM 1501. Until now DT’s carbon wheelset – the XMC 1200­ – was only available in a 24-mm wide option, but times are changing and rims have been getting progressively wider over the years. For 2018 the XMC 1200 grows significantly in width and will be available in a 30-mm inner-width option – currently the happy medium for trail and enduro riders. The wheelset with 28 spokes weighs in at 1446 g for 27,5” and 1540 g for the 29” version. The additional 30 g shouldn’t be a massive issue, considering the numerous advantages such as better traction and comfort. Though, carbon comes at a price! The hybrid hubs could be an insider tip for bike-park-junkies and heavy riders and will be soon available individually in all current axle-standards. The hubs originally developed for E-bikes could also be used as robust problem-solvers for non-motorised bikes. They have been reinforced in all their critical points, and come with a tough steel freewheel.

This year MAXXIS didn’t present a new trail and Enduro tire, and yet a lot happened. For the new season, the American tire specialist offered even more tires in their Wide-Trail version, which has been optimized for wider rims. For instance, the popular MAXXIS Aggressor rear-tire will be available in the 2.5” WT version and with reinforced Double-Down carcass as an option. Additionally, MAXXIS has significantly expanded their 2.6” tire-range. The company has upgraded its entire portfolio, with larger sizes are more options of their existing tires. Nearly every MAXXIS trail- and enduro-tire will be available in the WT version, especially developed for rims with 30 to 35 mm width.

In a comeback of the season, Kenda has redesigned the Nevegal from scratch. Thanks to a trail-specific carcass, the Nevegal is supposed to be sufficiently puncture resistant. The EN-DTC dual-rubber compound on the other hand, provides sufficient grip whilst maintaining acceptable levels of rolling resistance. The tire is aimed at enduro and ambitious trail riders and will shortly be available in both 29” and 27.5″ with 2.4 “and 2.6” widths. Along the new Nevegal 2, Kenda has also presented a 29” version of the Hellkat and Helldiver, the Gravity Folding-carcass and the Advanced Trail Casing for both tires. The new folding carcass is about 80 g lighter than the Gravity-carcass but boasts a similar puncture-resistance. The Advanced Trail Casing is again significantly lighter (almost 300 g) and is mainly aimed at touring-riders who prioritise better rolling resistance.

Fizik’s top of the range R1B pro-level shoe will be superseded in 2018 by the all-new Infinito R1. The new design is based around a new closure concept that uses twin Boa dials. There's also the new R5 Artica and X5 Artica boots for those cold winter days. On the saddle side of things, Fizik has added another dimension to its choice of saddles with two new additions to its existing models: the new Versus Evo and Open ranges. 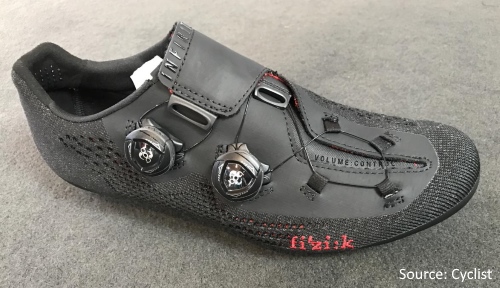 When it comes to bike shows, there is an unbelievable, whole new range of innovative tech, merch and components launched with numerous products on display, each being as impressive as the nest one. Stay tuned for part 2.