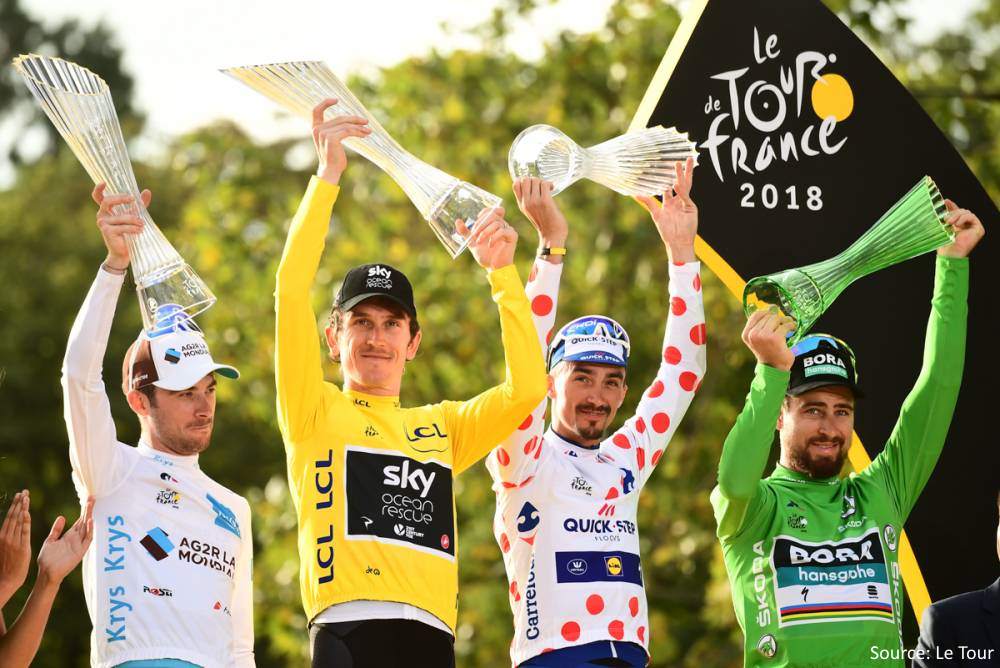 In what was perhaps the most exciting second half of the Tour, the Tour De France came to an end on the 29th of July. Here’s an overview of how stages 11 to 21 unfolded. Read on to find out who won this year’s Tour.

Stage 11, July 18th: The day’s race commenced at Albertville and comprised of a 108.5-kilometre race, the second leg of the tour in the Alps. This was the first day of the race that saw massive excitement, mostly at the final summit finish at La Rosiere. The end of the race witnessed a fight for the top spot 6 kilometers from the finish line. Emerging victorious was Geraint Thomas (Team Sky), followed by Tom Dumoulin, and Chris Froome. With this enormous victory, Geraint Thomas earned the yellow jersey at the end of this day.

Stage 12, July 19th: The days race commenced at Bourg-Saint-Maurice Les Arc and comprised of a 175.5km route that was the longest and hardest of the Alpine Stage this year. A massive crash sent Vicenzo Nibali to the hospital, with 4 kms to go. However, he managed to finish 7th in the stage. Unfortunately, though, a fracture to his T10 vertebra as a result of the crash forced him to abandon the race at this stage. The end of this day saw Geraint Thomas emerge victorious, with a second consecutive victory. Tom Dumoulin (Team Sunweb) came in second, followed by Romain Bardet (AG2R La Mondiale) who finished third. Geraint Thomas held on to the Yellow Jersey at the end of the stage. 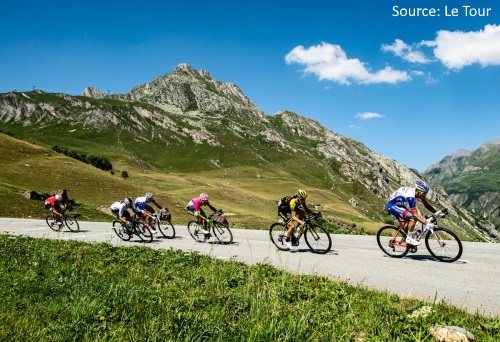 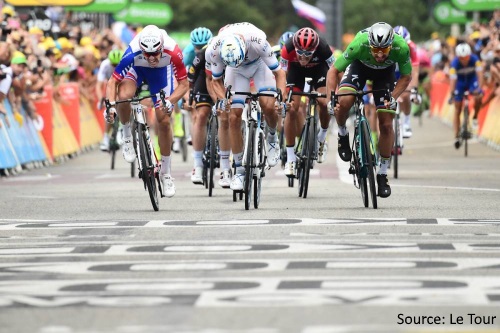 Stage 13, July 20th: The day’s race commenced at Bourg d’Oisans and comprised of a 169.5-kilometre race. The race profile was relatively flat compared to the previous three stages and allowed the riders some recovery. Team Sky led the race into the final 10km and onto the city streets of Valence, with yellow jersey Geraint Thomas and Chris Froome safely at the front to avoid potential crashes or gaps. The end of the day saw Peter Sagan emerge victorious – winning his third stage in this year’s Tour, while Geraint Thomas held on to the Yellow Jersey.

Stage 14, July 21st: The day’s race commenced at Saint-Paul-Trois-Chateaux and comprised of a 188-kilometre route, across a mixed terrain with rolling terrain, followed by steady ascents and a series of categorized and uncategorized climbs. This stage was yet another transitional stage between the Alps and Pyrenees and came with a sting in the tail in the form of the uphill finish at the airstrip in Mende. At the end of this stage, Omar Fraile (Astana) emerged victorious, surviving from a large breakaway and earning him his third victory of the season and the biggest of his career. Following him, in second place was Julian Alaphilippe (Quick-Step Floors) and Jasper Stuyven (Trek-Segafredo) who placed third.

Stage 15, July 23rd: The day’s race commenced at Millau and was a 181.5-kilometer route with Category 1, 2 and 3 Climbs on the route. This was the final transition day before the rest day prior to the Pyrenees. This stage proved as challenging as predicted, and saw some climbs that challenged the rider’s nerves, legs and spirits. This stage saw Magnus Cort (Astana) emerge victorious, in a second consecutive stage win. Coming in at second place was Ion Izzagirre, and in third place was Bauke Mollema. Team Sky’s Geraint Thomas retained the Yellow Jersey for yet another day.

Stage 16, July 24th: The day’s race commenced at Carcassonne and comprised of a 218-kilometer race with two Category 4 climbs just out of Carcassonne, and further into the day were three more challenging climbs – the Col de Portet d’Aspet, the Col de Mente, and the Col de Portillon. These late stage climbs shook up the breakaway. The end of the stage saw Julian Alaphilippe (Quick-Step Floors) emerge victorious, winning his second stage in this year’s tour. Team Sky’s Geraint Thomas retained the Yellow Jersey, for yet another day. 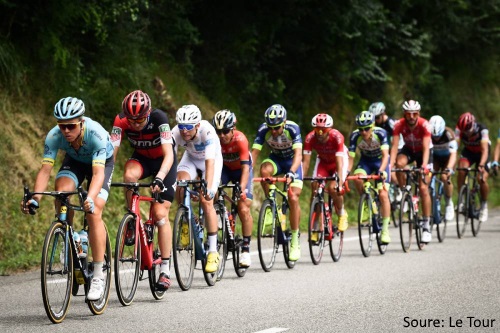 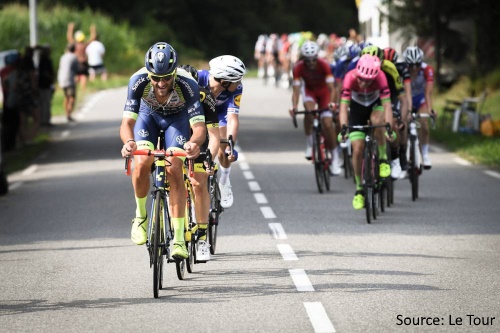 Stage 17, July 25th: This stage commenced at Bagneres-de-Luchon and comprised of a 65-kilometre route that covered three major summits, including the highest and steepest mountain in this year’s edition of the Tour De France.  After lining up in the Tour's first-ever grid start by GC ranking, the riders started climbing immediately on the category 1 Col de Peyresourde, reaching the 1,645m summit just 15km into the day. Three major summit climbs made for a day of several attacks and an exciting race. This stage also saw Green Jersey rider, Peter Sagan, involved in a crash on the second descent – that left people questioning his continuation in the race. He did get back into the race, to finish 134th. The day’s end saw Nairo Quintana (Movistar) emerge victorious, attacking on the final climb to ride alone to the summit of Col du Portet and win his first Tour stage win. Dan Martin placed second while Geraint Thomas placed third and retained the yellow jersey.

Stage 18, July 26th: The day’s race commenced at Trie-Sur-Baise and was a 171-kilometre race on a relatively flat, sprint-friendly route. A crash in the peloton took down stage 17 winner Nairo Quintana but continued despite deep scrapes on his left elbow and shoulder. A much-awaited bunch-sprint towards the finish line at Pau saw Arnaud Demare emerge victorious. In second place was Christophe Laporte followed by Alexander Kristoff, in third. Team Sky’s Geraint Thomas continued to hold on to the Yellow Jersey at the end of this stage.

Stage 19, July 27th: The day’s race commenced at Lourdes and comprised of a 200.5-kilometre route will took the participants back to the Pyrenees and comprised of three summits – the Col d’Aspin, the Col du Tourmalet and the Col d’Aubisque. The end of this stage saw Primoz Roglic wagering a series of relentless along with his LottoNL-Jumbo team, emerging victorious on a breathless final mountain stage of the Tour de France to Laruns in the Pyrenees. Geraint Thomas placed second followed by Romain Bardet, in third place. Geraint Thomas ended the day retaining the Yellow Jersey.

Stage 20, July 28th: The second last day of the Tour De France comprised of a 31-kilometre Individual Time Trial in the French Basque Country, a region famous for short and steep climbs. The stage provided a testing challenge to round off the race. Standing out on the profile was the sharp 900-metre, 10.2 per cent climb of the Col de Pinodieta, which was just 3km from the finish. But aside from that, the profile was somewhat deceiving, with the reality meaning steeper hills, tricky descents, and rolling roads where the profile appeared flat. The end of the day saw Tom Dumoulin emerge victorious. Chris Froome placed second, coming in a second after Dumoulin. Geraint Thomas placed third and sealed his overall victory ahead of the final stage into Paris – making this Team Sky's sixth victory in eight Tours.

Stage 21, July 29th: After the customary champagne and photo opportunities during the first half of the stage, things serious once the peloton hit Paris. A six-man break got away early on the Champs-Élysées circuits, but with the sprinter's teams keen to take the glory on the Tour's last day, they were hunted down with 6.5km to go. The end of the stage saw Alexander Kristoff (UAE Team Emirates) emerge victorious beating John Degenkolb (Trek-Segafredo) for the stage win, with Arnaud Démare (Groupama-FDJ) completing the podium. Geraint Thomas sealed his first Tour de France victory, finishing safely behind the peloton in Paris. Thomas, Tom Dumoulin (Team Sunweb) and Chris Froome (Team Sky) made up the final GC podium, while Peter Sagan (Bora-Hansgrohe) took a record-equaling points classification win and Julian Alaphilippe (Quick Step Floors) won the mountain classification. Movistar took the team classification for the third time in four years, while Dan Martin (UAE Team Emirates) won the combativity prize. 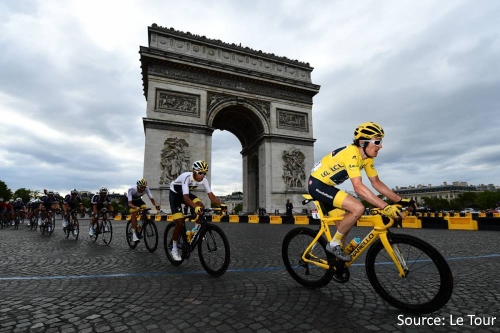