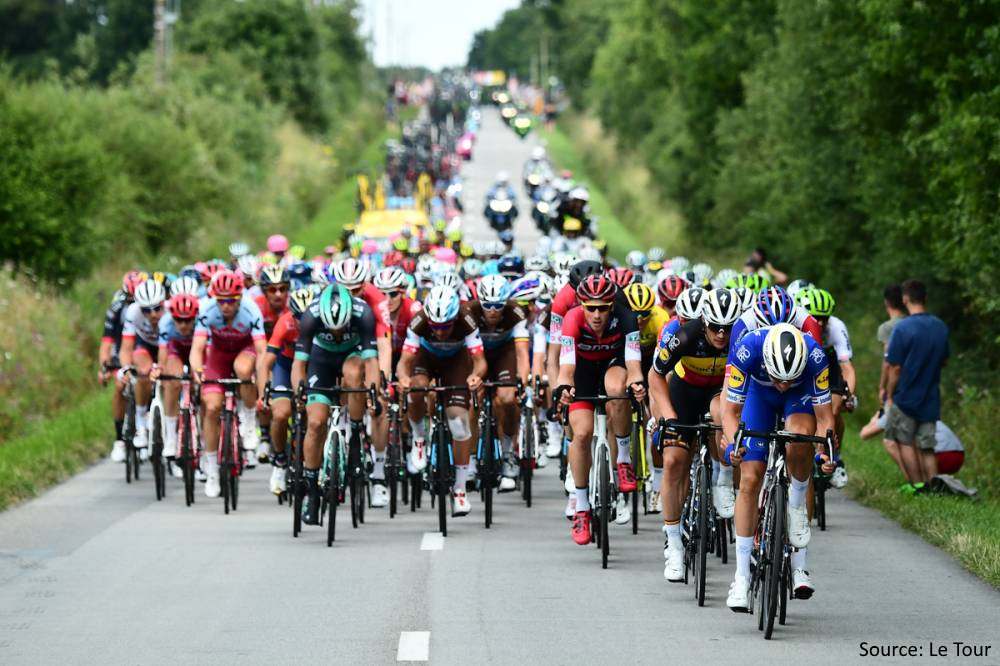 Packed with excitement, the Tour De France this year is well over it’s halfway mark. We understand that though many of you want to watch it, and keep up with it, busy schedules could come in the way of doing so. We have summarized the first ten stages of this year’s Tour in this article, with highlights enough to get you all caught up on what’s been happening. Read on to find out who holds the coveted jerseys, and what’s been happening in Le Tour.

Stage 2, July 8th: The days race commenced at Mouilleron-Saint-Germain and comprised of a 182.5km route that was flat with just one category 4 climb in the beginning. 90km into the 2nd Stage saw the first exit of this year’s Tour De France – Tsgabu Grmay (Trek Segafredo) had to drop out of the race owing to severe abdominal pain. The day’s race came to an end at La Roche-sur-Yon with a crash 2km from the finish line, that took many riders from the peloton out of contention for the win, including stage 1 winner, Gaviria. The end of this day saw Peter Sagan emerge victorious, winning his 10th TDF Stage. Sonny Colbrelli (Bahrain-Merida) came in second, followed by Arnaud Demare (Groupama – FDJ) who finished third. 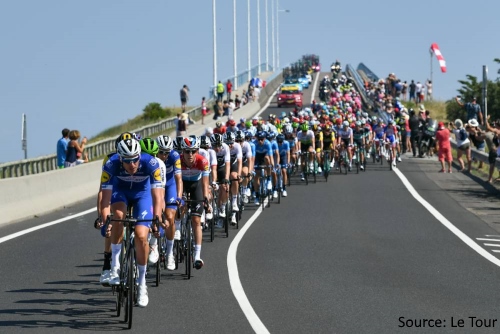 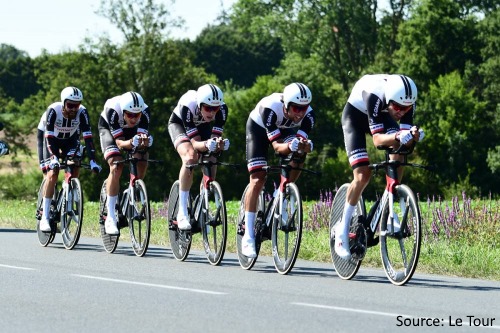 Stage 3, July 9th: A team time trial on this day, the first one since 2015 – and was a 35.5-kilometre route around the town of Cholet, with changing terrain across the route and a climb to the finish point. The end of the day say the BMC Racing team emerge victorious, with Peter Sagan losing the Yellow Jersey to BMC’s Greg Van Avermaet. Team Sky came in second, closely followed by Quick-Step Floors in the third place.

Stage 4, July 10th: The day’s race commenced at La Baule and comprised of a 195-kilometre route, that saw a steady gap of 8 minutes between the breakaway riders and the peloton, for a majority of the race. The run into Sarzeau was the longest finishing straight of this year's Tour de France, and the sprint trains made the most of it. After what appeared to be a blanket finish, an overhead image revealed that Fernando Gaviria emerged victorious, claiming his second stage victory in this year’s Tour De France. In second place, was Peter Sagan followed by Andre Grepel (Lotto Soudal) in third place. The end of the day saw BMC’s Greg Van Avermaet finish strong enough to hold on to the Yellow Jersey for another day.

Stage 5, July 11th: The day’s race commenced at Lorient and was a 204.5-kilometer route with five categorized climbs with three Category 3 ascents. This stage proved as challenging as predicted, and saw rolling terrain that tested the rider’s nerves, legs and spirits. At the end of a demanding afternoon in the rugged hills of Finistère, only the strongest remained in contention at the finish line at Quimper. This stage saw Peter Sagan emerge victorious, tightening his grip on the Green Jersey. Coming in at second place was Sonny Colberlli, and in third place was Phillipe Gilbert (Quick-Step Floors). BMC’s Greg Van Avermaet, who placed seventh in this stage, retained the Yellow Jersey for yet another day.

Stage 6, July 12th: The day’s race commenced at Brest and comprised of a 181-kilometre race over a rolling terrain, with disruptions along the way by crosswinds. The most challenging part of the ride was towards the finish line, with the double circuit of the Mur de Bretagne that saw UAE Team Emirates’ Dan Martin demonstrate his uphill skills with a long-range attack with over a kilometer to go to emerge victorious in this stage. Following him was Pierre Latour (AG2R La Mondiale) in second place and Alejandro Valverde (Movistar Team) in third place. BMC’s Greg Van Avermaet retained the Yellow Jersey, for yet another day. 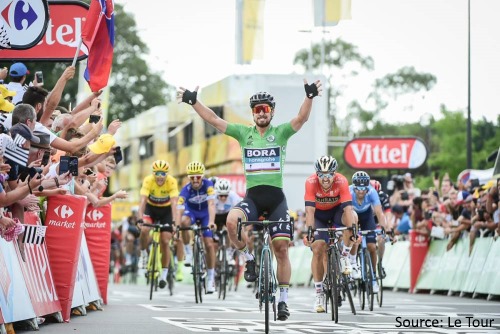 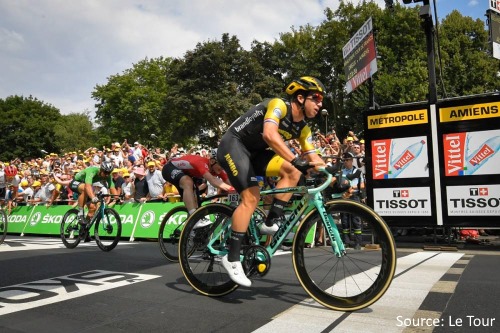 Stage 7, July 13th: This stage comprised of the longest distance of the tour, a 231-kilometre race that commenced at Fougeres. While most of the race was subdued, an exciting finish saw Dylan Groenewegen (LottoNL-Jumbo) out-sprint Fernand Gaviria and Peter Sagan, to emerge victorious at the end of the day’s race at Chartres, earning his second Tour De France stage win of his career. Gaviria placed second while Sagan placed third. However, Van Avermaet managed to retain the yellow jersey at the end of this stage.

Stage 8, July 14th: The day’s race commenced at Dreux and was a 181-kilometre race on a relatively flat course with two category 3 climbs along the way. A sprint towards the finish line at Amiens Metropole saw Dylan Groenewegen emerge victorious, once again, earning his second Tour De France stage win this year, in a row! In second place was Peter Sagan followed by team mate John Degenkolb, in third place – after Andre Greipel and Fernando Gaviria were relegated by the race officials after the stage ended. With a strong lead on the rest of the GC Contenders, BMC’s Greg Van Avermaet continued to hold on to the Yellow Jersey at the end of this stage.

Stage 9, July 15th: A crash heavy 156.6-kilometre race that commenced at Arras Citadelle, and featured 15 sections of cobblestones, including some of the longest and hardest in the region covering a total of 21.7km of cobblestoned sections. The toughest sections in this region that were covered on this day included Auchy à Bersée and Mons-en-Pévèle. Stage 9 saw Australian rider, Richie Porte leave the race at this stage for the second year in a row. He was forced out by a severe collarbone injury because of a crash before the cobble section. The day saw several crashes and mechanical problems, including a large crash in the middle of the peloton, 67 km into the race – which saw the peloton split. At the end of the day John Degenkolb (Trek-Segafredo) emerged victorious, with Greg Van Avermaet finishing second followed by Yves Lampaert (Quick-Step Floors) in third place. Van Avermaet ended the day retaining the Yellow Jersey, while Peter Sagan continued his strong hold on the Green Jersey.

Stage 10, July 17th: After a day’s rest, the riders faced the beginning of the mountain stages of this year’s Tour. The Tour De France entered the famed Alps at this stage. The day’s race commenced at Annecy, and covered 4 categorized climbs, where the riders faced the first ‘beyond category’ climb. This was the Montee Du Plateau de Glieres, which was a short yet steep climb with an average grade of about 12 percent. The descent finish saw Julian Alaphilippe (Quick-Step Floors) emerge victorious in his first ever Tour De France stage, after a 30-km long solo attack over two mountains. Following him, in second place was Ion Izagirre (Bahrain-Merida) and Rein Taaramae (Direct Energie) in third place. BMC’s Van Avermaet extended his overall lead, to hold on to the Yellow Jersey at the end of this stage. 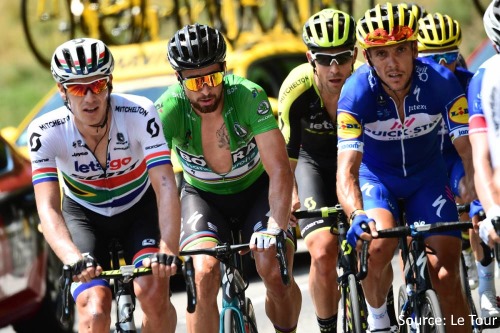 With top riders having fallen out or fallen far behind, Chris Froome nowhere in line for the Jersey, Sagan going strong with the Green Jersey and Van Avermaet with a strong hold on the Yellow Jersey, the remaining stages of the Tour De France should hold a ton of excitement and surprises. Stay tuned for our next race update.