Shimano is one of the world leaders in the segment of bicycle component manufacturing. The Japanese multinational company manufactures bicycle gear shifters, derailleurs, wheels, hubs, pedals, shoes and more such performance accessories for cycling. I got a chance to review the Shimano 105 5800 groupset, and here’s what I feel about it.

Shimano 105 is the third tier of groupset from the Japanese component giant and sits just below the top-level Dura Ace and Ultegra groupsets. The Shimano 105 is generally considered the entry-level 11-Speed groupset for the serious road bicycle enthusiast. Shimano 105 is usually fitted stock on mid to high range road bicycle that fall in the price range of Rs 85,000-1,75,000. With lots of improvements happening in the 9-Speed and 10-Speed groupsets of Shimano in the recent years, the Shimano 105 has also undergone a few facelifts from its older versions and is now impressively closing in on Shimano’s higher end variants purely in terms of performance. The entire Shimano 105 groupset that we tested came with the following components:

Ever since the 11-Speed drivetrain was first introduced way back in 2012, it has become a norm for any road bicycle to be fitted with a 11-Speed groupset to deem itself worthy of being called a “serious” road bicycle. Shimano’s 105, the entry-level 11-Speed groupset is the cheapest 11-Speed “serious” option available in the market. But don’t let the word “cheapest” fool you for even a second, as the Shimano 105 gives zero compromises when it comes to a performance showdown between the 105 and as its bigger 11-Speed brothers, the Ultegra and the Dura Ace groupsets.

Shimano’s proprietary SIL-TEC polymer treatment also finds its way into the body of the shifters, the cables and on to the inner plates of the chain of the 105 groupset. This friction-reducing coating has been specially developed to reduce overall effort and speed up shifting, providing an improved overall shifting experience.

The trickle-down effect from it’s higher-ups seems very obvious in it’s ever reliable functionality, comfort, and ease of usage, and most importantly, its looks. The Shimano 105 boasts a sleek, slim tapered look that is identical to the Ultegra and Dura Ace. The only difference comes in its build. While the 105 has glass-fibre reinforced plastic brackets and aluminium main levers, the Ultegra and Dura Ace dual control levers have carbon-fibre reinforced plastic brackets and main levers. The cabling is fully internal, and the cables are also responsible for the incredibly light shifting feel.

The Shimano 105 2x11-Speed chainset with a 50-34 chainring option that I test rode is a real piece or art. It comes with a 4 arm spider design spindle, with four unevenly spaced arms, to provide stiffness where it’s needed while saving weight. The crank arm is connected to the chainrings with 4 secure bolts which makes it extremely easy to swap out chainrings in case one needs to opt for a bigger 52/36 or a 53/39 chainring for all-out flat road riding. Shimano has thankfully got rid of it’s 3x chainring option for the 105. As it is, for most riders, some of the 22 available combinations in a 2x11 speed groupset go unused. I can’t even begin to imagine where one would ever feel the necessity to use all of the 33 combinations in a 3x11 speed drivetrain on a road bicycle.

The Shimano 105 derailleurs, both front and rear, shift with lightning precision and efficiency. The front derailleur comes with aluminium links, a chrome-plated steel chain guide, and light shifting. A trim position helps avoid chain rub as the chain moves across the cassette. The front derailleurs come with both braze-on as well as band-on options. The only restriction is that the largest chainring that can be used with the 105 FD is a 53 teeth chainring. But then, this is the same for the Ultegra too. This would however prove a bit of a challenge only for the serious time trialists who would prefer a bigger chainring.

The Shimano 105 read derailleur is buttery smooth when it comes to shifting and ease of use. It doesn’t need a huge push on the levers like the older versions, and just a light tap on the lever initiates a sweet, smooth transition. One more reason for this smoothness is the 11 speed cassette that provides smaller jumps between cogs, giving the feeling of gradually rising up or flowing down, rather than give jerky jumps between cogs. The bike that I test rode came stock fitter with a Shimano 105 11-Speed 11/32 cassette which is ideally suited for spinning up those climbs, but the medium cage on the 105’s rear derailleur enables the rider to fit even a 11/28 or a 11/25 cassette onto it, if the rider wants to smash out those flat road segments.

With the new, improved Shimano 105 dual pivot brakes, it has become easier and faster to stop this smooth rolling juggernaut. The brake pads feel firm and grippy and stop the bike efficiently with just a light touch on the brake levers. The Shimano 105 braking system comes with a set of front brake calipers, rear brake calipers, and a direct mount rear brake variant which can be mounted on aero and TT frames under the bottom bracket, for increased aerodynamic advantage. The SLR-EV dual pivot brakes are made from anodized aluminium and a symmetrical twin pivot system equalizes the braking forces through each arm allowing for better control and braking power. The maximum tire size that can be mounted into a 105 brake system is 28C.

The roller link plates of the Shimano 105 Super-Narrow 11-speed chain comes with the Sil-Tec low friction plating process which makes it run smoother, increases the durability (which means lesser chain wear) and is also virtually maintenance free. All 11-speed chains from the Shimano family are compatible with all Shimano 11 speed groupsets and all Shimano 11 speed cassettes. This makes it easy to swap out cassettes and chains of other Shimano 11-speed groupsets without having to worry about compatibility issues. 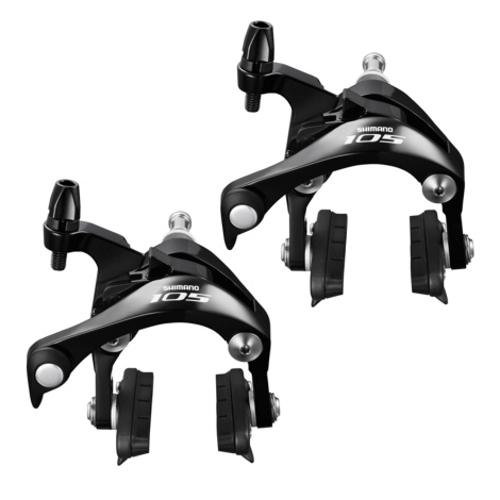 The Shimano 105 5800 11-Speed groupset offers improved shifting efficiency, flawless braking, and a brilliant all-round performance and quality that one would usually expect only from high-end groupsets. Of course, one could save a few hundred grams by upgrading to the Ultegra or Dura Ace (if getting your bike lighter is your highest priority), but only if you are prepared to pay almost double the cost for a few marginal gains. With the price tag that the Shimano 105 totes, it would be almost impossible to find a flaw with it. One of Shimano’s most cost-efficient product that comes with zero compromise on performance as well as aesthetics. A true winner!