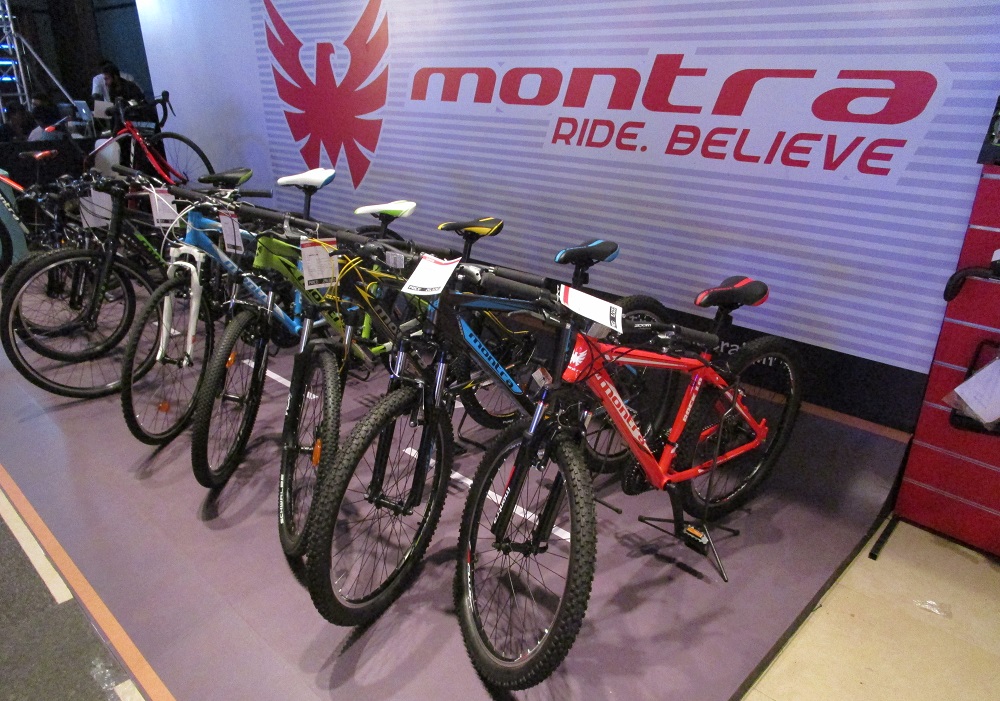 TI cycles of India launched their 2015 range of Montra bicycles earlier today. The Montra brand itself is a fairly young brand. In a time when only International brands we trusted to deliver in terms of quality and reliability, Montra was started with the objective of bringing that International quality to the market while staying Indian at heart.

The newest range of Montra bicycles was designed specifically keeping the Indian consumer in mind.Most International companies design bicycles based on the average heights and builds of their demographic. Montra has applied this logic to the Indian market and has designed and developed frames and geometries for Indian consumers. In addition to this, a lot of thought has gone into preparing these bicycles for the Indian terrain and maintaining a low price tag.

Montra Road Bicycles
4 New Road bicycles were unveiled in the 2015 range. The Montra Chord Carbon is their first full carbon frame bicycle with a solid roadie geometry. The bicycle comes fully equipped with the Shimano 105 Groupset. The bicycle is priced at a very nominal INR 1,12,000 making it the most affordable full carbon frame road bicycle available in India. The Montra Celtic 2.1 and 2.2 are both alloy frame road bicycles priced at INR 33,000 and INR 39,990 respectively. The crown jewel of the line up how ever, was the Montra Unplugged 1.1. The road bicycle is priced at a super low INR 23,500 and is equipped with the Shimano Tourney groupset. This is what we expect to be a real game changer. We could possible see a lot more people on the road with this bicycle.

Montra MTB bicycles
7 New MTB bicycles were introduced. Among these are familiar names such as the Rock 2.1 and the Rock 1.1, both with upgraded specifications and newer colours. The Rock 650B HD and MD are Montra's first 27.5" wheeled bicycles. The 650B HD is priced at INR 45,000 and is equipped with Hydraulic Disc Brakes and Deore groupset, while the 650B MD is priced at INR 36,000 and has Mechanical Disc Brakes and Alivio and Altus Rear and Front derailleurs. All the bicycles in the range are Alloy frames.

Montra Hybrid Bicycles
In the Hybrid category, 6 new bicycles were added to the range. The Montra Timba's claim to fame is that it is India's first bicycle with Internal Cabling. It has a design and geometry that has been completely designed at TI Cycles. There is also a version specifically designed for women so that they don't have to buy small frames of the men's version if they like the bicycle. The bicycle is priced at INR 26,000. The range includes the Blues 1.1, 1.2 and the 1.1 rigid priced at INR 19,490, INR 23,990 and INR 19,490. All bicycles have alloy frames and are equipped with Shimano componentry.
The Trance and Trance Pro were also announced today and are already available in stores.
Montra Kids Bicycles
Montra forays into the Kids bicycle segment with their 2015 range. The Montra 24DTR and 20DTR are both alloy framed bicycles priced at INR 10,900 and INR 9,900 and, as the name suggests, are 24" and 20" wheel sizes respectively.

Mr. Chandrasekhar of TI Cycles of India who spoke at the launch called this range of bicycles "the most comprehensive range of bicycles under a single brand." He went on to explain that the range is targeted at Beginners and Amateur riders. The entire range of Montra bicycles will be available in stores by January 2015.