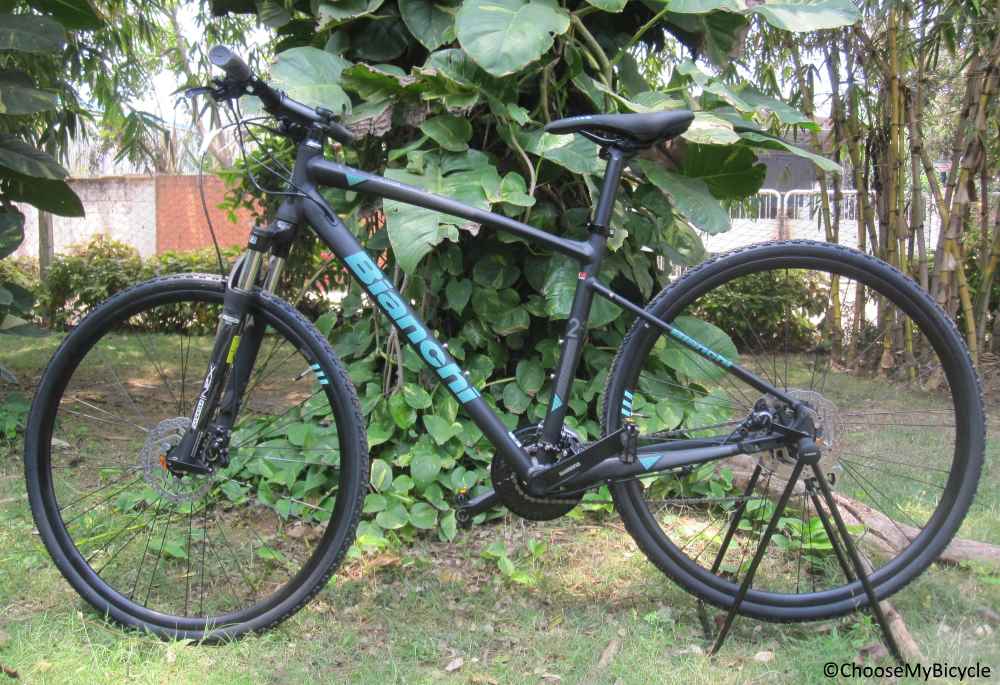 Bianchi are known for producing bicycles that deliver in terms of style, comfort and impressive performance and have been in India for a while now have recently launched it’s 2018 range. We got the opportunity to check out the Bianchi C Sport Cross. Read on to know more about the bicycle. 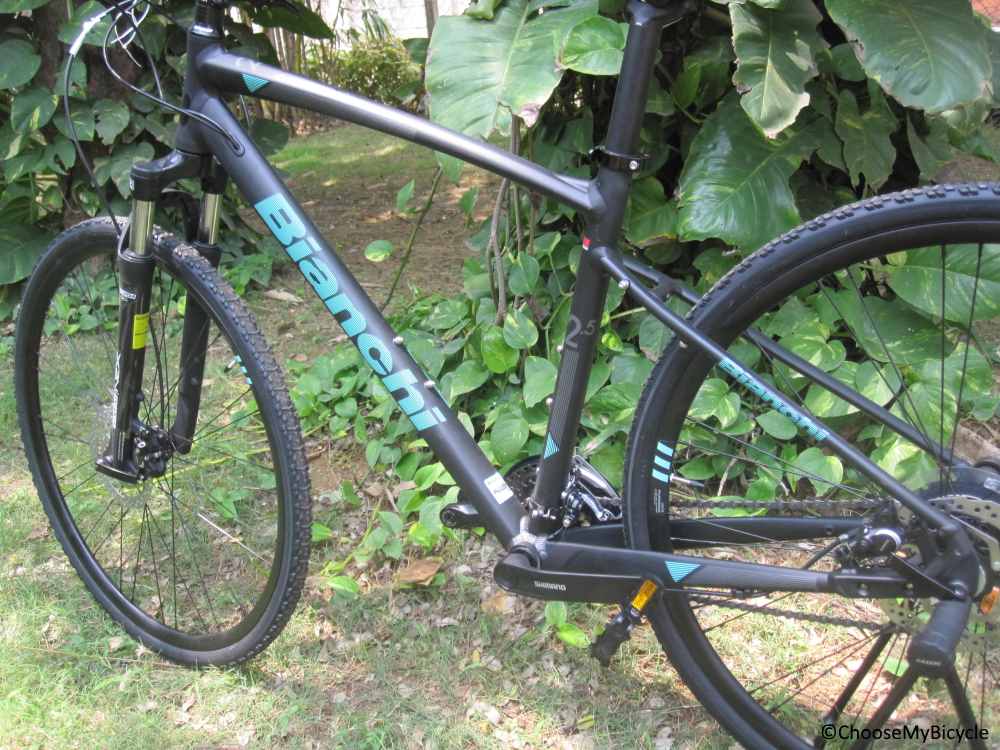 The frame of Bianchi C Sport Cross has been made using a 6061 Alloy, with hydroforming. Not only is an alloy frame lightweight, it is also durable and agile, allowing for easier handling. The welding on this frame is of high quality, evident from the smooth edges. The geometry of the frame enables a comfortable riding position with a hint of aggressiveness which, in my opinion, enhances the overall performance while not straining one’s back. The frame has mounting options for two water bottle holders, a provision for mudguards at the front and rear, and a pannier mounting option at the back. This bicycle is available in three sizes - Small (17“), Medium (18.5“) and Large (20“). 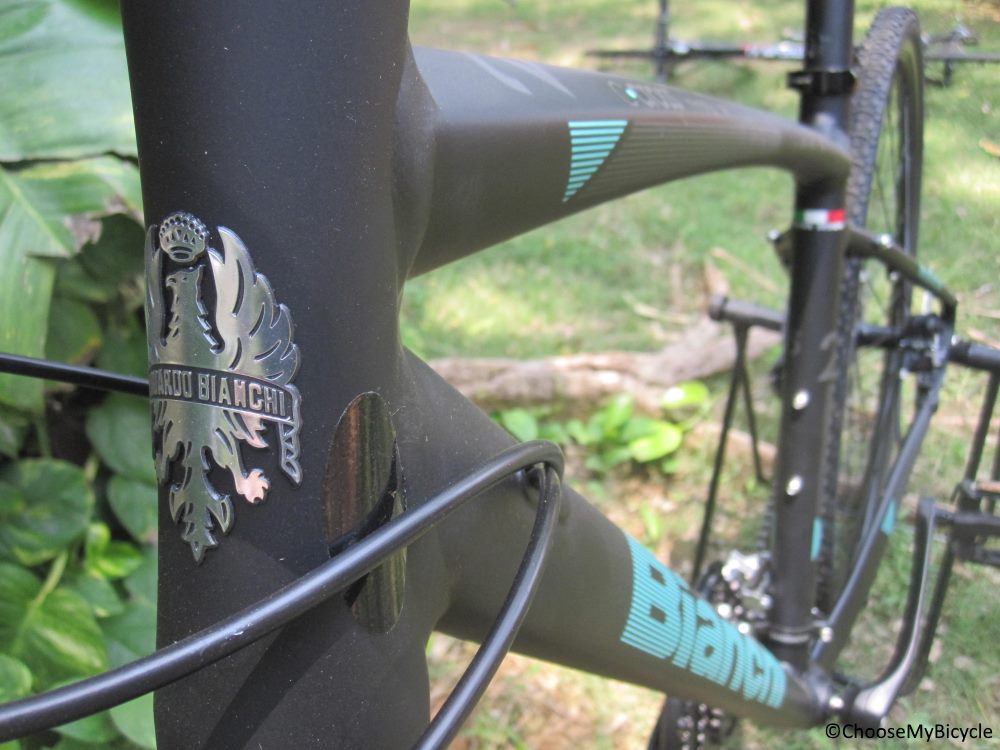 A well designed hybrid bicycle that is aesthetically pleasing

When it comes to this department, Bianchi sure know what they are doing. The Bianchi C Sport Cross is available in a single colour option - a black with celeste and grey decals and branding. The paint job appears to be high quality with precision and attention to detail. Additionally, internal tubing not only adds to performance but also the overall aesthetic appeal of the bicycle! This bicycle a definite eye catcher.

The Bianchi C Sport Cross is a 24-Speed bicycle that comes equipped with a Shimano Tourney Front Derailleur and a Shimano Acera Rear Derailleur whose shifting is controlled by Shimano ST-EF505 shifters. The derailleurs worked effectively to enable smooth, seamless shifting without a hint of any lag or delay in changing from one gear to another. The shifters were quick to respond and in transmission. An upgraded front derailleur could have been expected at the given price point, though the performance of the existing one is beyond satisfactory. No complaints. The placement of the shifters enabled easy, comfortable access. 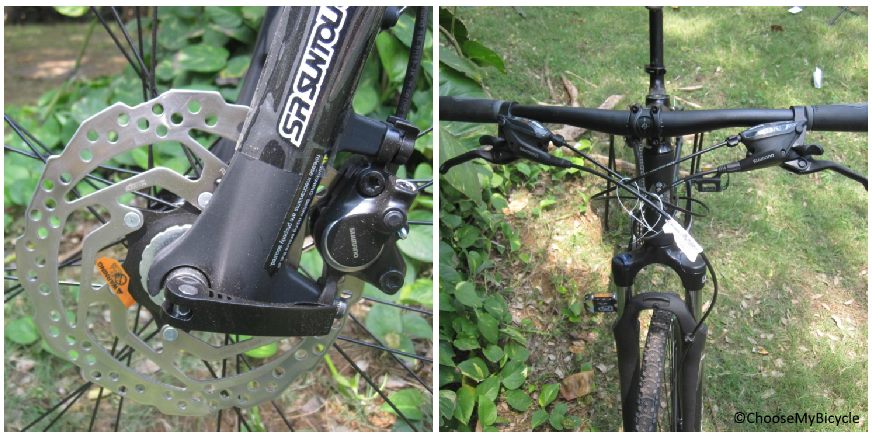 The Bianchi C Sport Cross comes equipped with Shimano M315 Hydraulic Disc brakes. The braking performance was responsive enabling soft braking that felt stable and controlled. However, abrupt braking was not as powerful, which might be required while riding in crowded conditions requiring abrupt powerful braking that is smooth and stable.

This bicycle comes with a 700mm Alloy handlebar that is relatively flat. The width of the handlebar enables a comfortable, ‘open-chested’ riding position. Additionally, a wide and flat handlebar ensures added control, stability and manoeuvrability. The grips on the handlebar exuded comfort with the perfect amount of cushioning required for a hybrid bicycle for long distance riding. 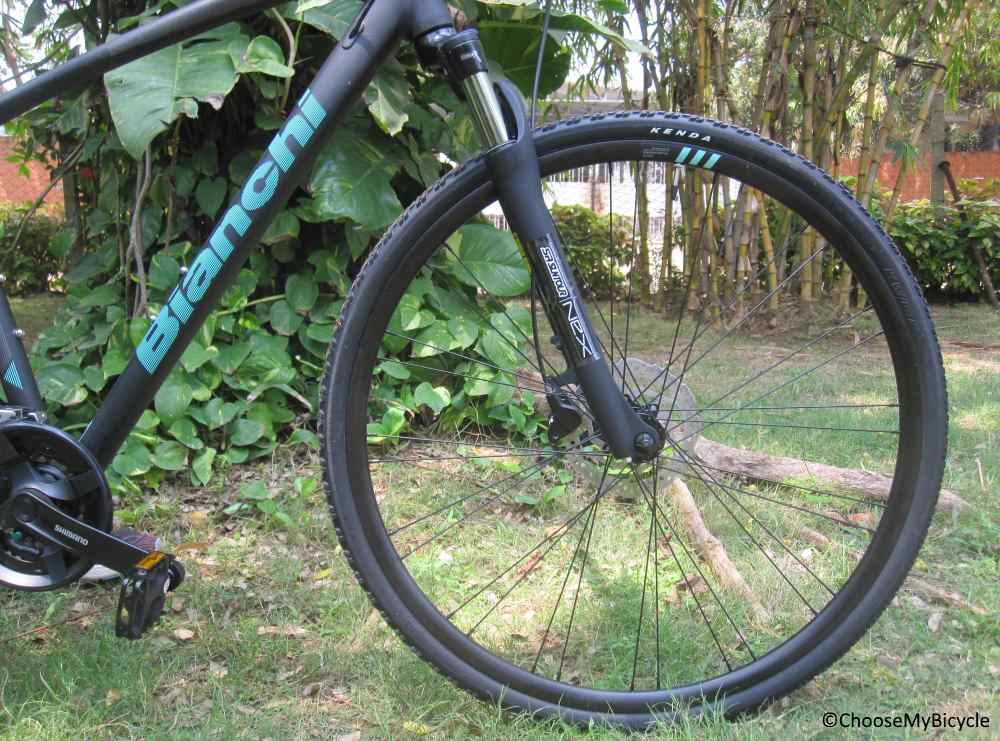 Cornering even at higher speeds, was well balanced and smooth

The Bianchi C Sport Cross comes equipped with Kenda 700x35C tires. The dimensions of the tires ensured a speedy ride, and the light treading on them offered superior grip and stability. These tires ensured that cornering, even at higher speeds, was well balanced and smooth. Additionally, the treading on the tires are sure to ensure that this bicycle is stable while riding on wet and slippery surfaces. The tires are attached to TEC-Sport Edition alloy rims which contribute to keeping the bicycle as lightweight as possible. The wheels come with a Quick Release option at the front and the back, enabling for quicker and easier removal of the wheels when necessary.

This bicycle comes equipped with a WTB saddle. While on the test ride, the saddle was found to be comfortable. However, I feel that it could be on the harder side when used on long distance rides. I feel that the overall experience on this bicycle was rather comfortable and impressive.

While this year’s C Sport Cross from Bianchi remains at the same price tag as last year, there have been quite a few upgrades in terms of the componentry used with changes made across departments. To begin with, the suspension fork on this year’s bicycle has been upgraded to a Suntour NEX suspension fork with hydraulic lock out and 63mm travel as opposed to the 50mm travel last year. Next, in the gearing department - the shifters on this year’s bicycle have been changed to Shimano ST-EF505 shifters. Onto the braking, this year’s bicycle comes equipped with hydraulic disc brakes while last year’s model had V-Brakes. The Saddle used on this year’s bicycle is a WTB saddle as opposed to a Selle Royal Saddle on last year’s model. Another difference in this year’s model that not only has an effect on the overall aesthetics of the bicycle but also on the performance, is the implementation of internal cabling. So, while the price point hasn’t changed at all, the changes in the specs of the bicycle adds to its overall value for money quotient. This bicycle is ideal for endurance cyclists who want a performance hybrid bicycle that can handle semi rugged, uneven riding conditions and smooth roads, alike.

Prices are subject to change by the brand, without due notice.

Interested in the Bianchi C Sport Cross (2018)? Reach out to our Experts.

Our Bicycle experts are available to help you on your purchase with ChooseMyBicycle.com

Rate us on Google

Help future customers and our community by sharing your experience with ChooseMyBicycle.com