Home > World of cycling > Introducing Cyclotron-The Hubless, Spokeless Bicycle of the Future
Back 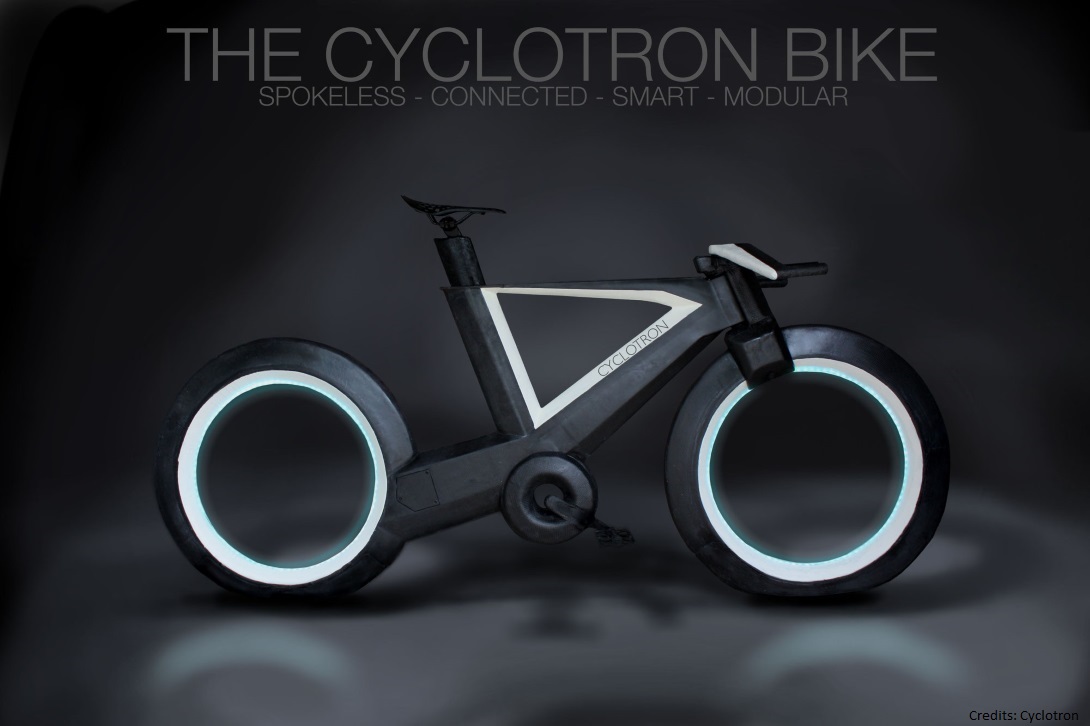 There is no doubt that Bicycles have come a long way since their creation in the 1800’s. Modern bicycles have become faster and more comfortable than ever before. However, the basic design of Bicycles of today is rooted in the past. This is exactly what Cyclotron is trying to change with its extremely futuristic TRON inspired bicycle.This hubless carbon bicycle looks all set to star in a science fiction movie. Over the years there have been plenty of concept bike and bicycles that resemble the Cyclotron. However, none of them offer any serious selling points except for the Cyclotron which is versatile and smart enough to create a revolution in the commuting space.

The frame of the Cyclotron is made of space grade Carbon sandwich wrapped around a lightweight core. The resulting shape is similar to that of current TT bicycles albeit looking slightly bulkier. The design of the frame allows the cycle’s drivetrain to be completely enclosed safely. The frame can be customized with decals according to the rider’s whims.

We come to the most striking aspect of the Cyclotron namely, the spokeless tires. The solid polymer airless tires not only add to the futuristic appeal of the bicycle but also increase its practicality. The company has come up with innovative accessories to use the space left vacant by the spokes for the purpose of storage.

The Cylotron’s design is not just skin deep. In addition to the traditional 12 and 18 speed manual setups, the Cyclotron is also equipped with an electronic sequential gearbox. The gearbox delivers extremely fast shifts (~0.2 seconds) and can operate on its own. The use of electronic gearbox will not impact the weight of the bicycle by a large margin as they are generally lighter than 18-speed manual gearboxes.

Perhaps the most futuristic aspect of the Cyclotron are its LED night lights. A sensor on the bicycle monitors the environment light and automatically switches on the LED wheel lights and laser-lane display, which allows the rider to ride safely in a poorly lit street. The lights are powered by a Lithium ion battery which can either be charged by a dynamo or by a wall socket.

Every Cyclotron owner will have access to a “Cyclo App” that comes with a plethora of useful information. The app derives its data from on-board sensors on the cyclotron and provides useful tips to riders based on his/her riding technique. Information like lap time, speed, calories burned etc. can be read from the app.The team behind Cyclotron is currently using Kickstarter-an online crowdfunding platform to raise the capital for the launch. You purchase the following models for the following prices if you choose to pledge on the site.12-Speed Variant -$99318-Speed Variant - $1450Electronic Gearbox Variant - $2875.

The price tags for backers will be much lower than the retail prices. The company plans to deliver the bicycles in June 2017.