Catching up with the Tour De France 2017: The Final Week

Home > World of cycling > Catching up with the Tour De France 2017: The Final Week
Back

Catching up with the Tour De France 2017: The Final Week 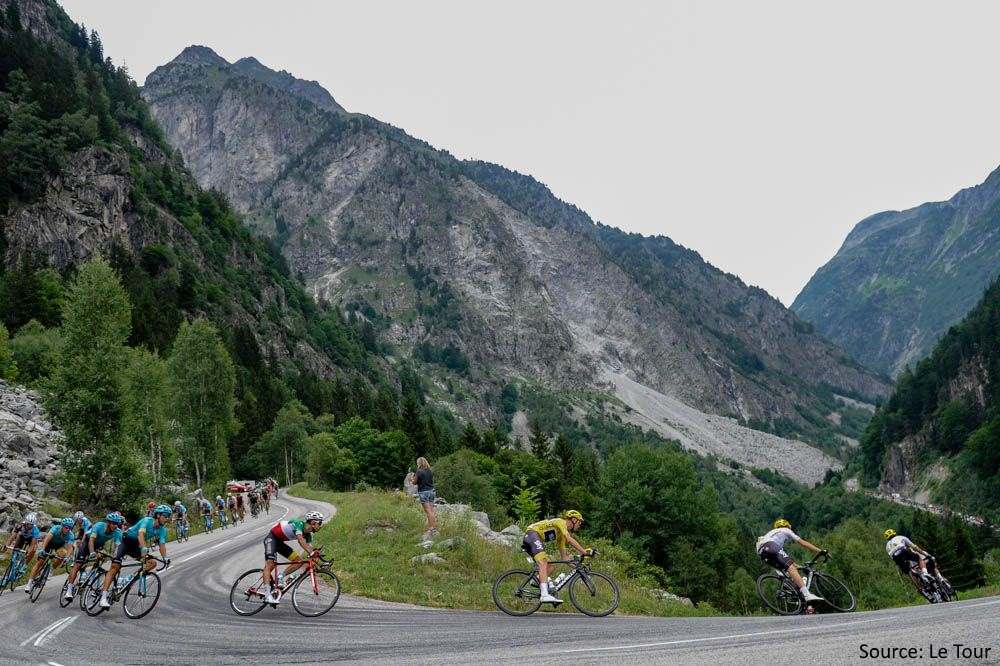 Following a rest day, the 18th day of the Tour De France entailed a 165-km route from Le Puy En Velay to Roman sur Isere. With expected crosswinds during latter part of the race, and an intense climb to Côte de Boussoulet right at the start, the outcome of the day’s race was hard to predict. The approach to the climb had Marcel Kittel and Michael Matthews head to head, fighting for the green jersey. Kittel was in the lead for the jersey, with about 50 points on Matthews. With expected crosswinds, there were no breakaway riders, just two pelotons – goes to show the kind of crosswinds expected and the riders’ concern about them!

The end of the day saw Michael Matthews (Sunweb) make a powerful sprint to emerge victorious on stage 16 of the Tour de France, edging out Edvald Boasson Hagen (Dimension Data) and John Degenkolb (Trek-Segafredo). The win marked Matthews’ second stage of the race and saw him regain 50 points on Marcel Kittel (QuickStep Floors) in the green jersey competition. And for the yellow jersey -  Chris Froome had a relatively calm day and lead the race by 18 seconds from Fabio Aru (Astana) and Romain Bardet (AG2R La Mondiale) in third, a further five seconds behind. 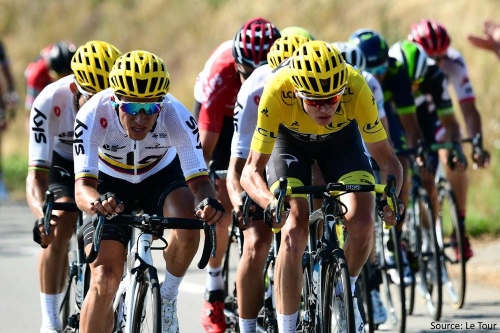 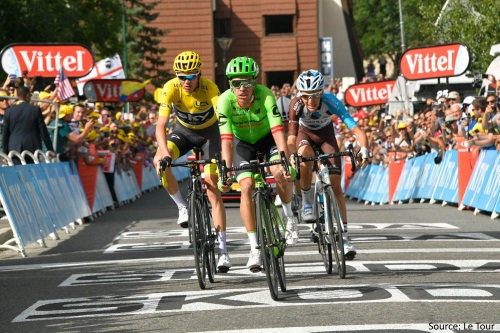 Day 19 of the Tour De France entailed a 183-km race from Le Murre to Serre Chavalier with four major climbs along the route with the Col d'Ornon, Col de la Coix de Fer, Col du Telegraphe and the Col du Galibie. The teams entered the Alps, and geared up for the first of two immense days of climbing. A crash in the first 20 kilometres caught Kittel who lost some time owing to medical attention needed on his right shoulder, elbow and knee!

In a rather shocking piece of news, Kittel was forced to quit the Tour De France, owing to the injuries sustained by him in the crash. He won 5 stages in this year’s Tour De France. But this meant that the green jersey would be Matthews to wear.

The end of the day saw Primoz Roglic (LottoNL-Jumbo) solo to his first ever Tour de France stage victory with a long-range attack into Serre Chavalier. Roglic had been part of the early break attacked on the final climb of the Col du Galibier and won stage 17 by over a minute, while impressively holding off the combined efforts of the top GC contenders.

Day 20 of the Tour De France entailed a 179.5-km route, with a summit finish at Cote D’Izoard. The day’s race marks the end of the race in the Alps.

With a category three climb in the first 30 kms of the race, 7 breakaway riders were able to set the gap to about 7 minutes from the peloton and sustain it for close to a total of over 100 kms! As the riders progressed with 50 km to go, the gap closed down to 5 minutes and further reduced to about a minute with the final few kilometres of the race left.

The end of the day saw Warren Barguil (Team Sunweb) continued his superb Tour de France with a summit finish victory on the Col d'Izoard, cementing his place at the top of the mountains classification. The Frenchman attacked with Alberto Contador (Trek-Segafredo) near the foot of the climb but left the former champion behind to hoover up all the breakaway riders to claim his second stage win at this year’s Tour de France. Romain Bardet (AG2R La Mondiale) edged himself closer to the yellow jersey by taking the bonus seconds on offer for third with Chris Froome in fourth. Froome still leads the race overall by 23 seconds over Bardet. It is beginning to look like it could be a close fight for the yellow jersey. 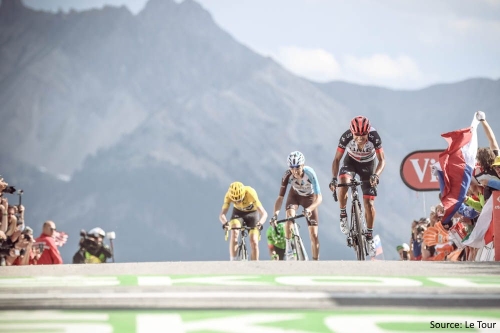 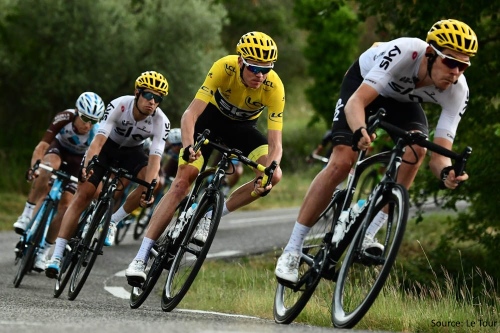 The 21st day of the Tour De France entailed a 222.5-km route from Emburn to Salon De Provence. This was the longest day of the Tour, this year. The day’s route was favourable for sprinters, though with a few climbs to contend.  In the early stages of the day’s race, Roosen from LottoNL-Jumbo was forced to quit the race, after losing energy and feeling unwell. The gap maintained a steady 10-minute timing, and kept it that way till the finish line at Salon De Provence.  The end of the day saw Edvald Boasson Hagen win the 19th stage of the Tour de France, attacking out of a breakaway to take the solo win. Second place went to Nikias Arndt (Sunweb), and third to Jens Keukeleire (Orica-Scott). It was the first win for Dimension Data at this year's Tour!

Day 22 of the Tour De France entailed a 22.5 km Individual Time Trial race within Marseille. The day saw a few crashes, with Pierre Latour crossing the line bleeding and bruised from a crash.  As is with most ITT stages, the nerves were tingling and energy high and tense. The end of the day saw Chris Froome (Sky) put his final stamp on the 2017 Tour de France, to increase his lead in the overall classification to 54 seconds and finishing third trial. Rigoberto Urán (Cannondale-Drapac) nearly crashed in one of the final turns, coming to a stop against the barriers in a tight left-hander, but still did enough to move into second overall ahead of Romain Bardet (AG2R La Mondiale). The Time Trial was won by Maciej Bodnar (Bora-Hansgrohe) with an overall timing of 28:15!

STAGE 21: Montgeron – Paris, 103km  Day 23, the last day of the Tour De France, entailed a 103-km route with the tour coming to an end at Paris. The day was one of celebration and excitement with the riders sipping on some champagne and beers while “racing”.

With 56 kilometres to go, the fun and chatting stop, as the riders hit Champs-Elysees and the final leg of the Tour De France began. The rainy weather added to the tension with the jersey wearers fearing a crash so close to the finish. The last 20 kms (three-laps) saw attacks and high energy as the riders set a pace so high, that many struggled to keep up. In an exciting finish, Dylan Groenewegen took a surprise sprint victory on the Champs-Élysées ahead of André Greipel winning his first ever Tour De France Stage Victory.

Meanwhile, Chris Froome confirmed his fourth Tour de France victory by finishing in the pack with his teammates. 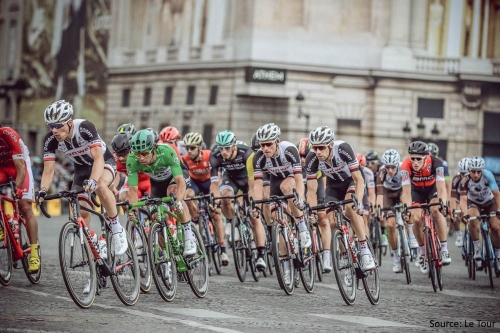 The Final Standings of the Tour De France, 2017 are as follows: