Catching up with the Tour De France 2017 Part 2

This year’s Tour De France is turning out to be exciting! It always is, though – isn’t it? As promised, here is what went down in the second week of The Tour De France 2017.

After day 10 being rest day, the start of Day 11 of the race saw a gentler day of racing after the excitement from the previous week. With category 4 climbs on the 178 kilometres from Perigueux and Bergerac, the sprinters had great opportunities on the Allee Lucien Videau. After an afternoon of gentle riding from the Peloton, the last 4 km saw the Peloton close in on a gap of approximately 5 minutes to nothing, in what seemed like seconds. The end of the day saw Marcel Kittel dash over the finish line (once again!), winning by an impressive margin. The yellow jersey remains with Chris Froome from Team Sky.

Day 12 of the race entailed a 203.5 kilometre route from Eymet to Pau. The racing started off slow, with the Peloton maintain a steady 2.15 average gap from the breakaway riders. After over 100 kilometres, with 96km remaining, a crash left Cataldo from Team Astana, with an injury bad enough to have him quit this year’s race. With 4.5km left, the gap broke down to 19 seconds, with riders vying for the finish line. In an exciting finish, Marcel Kittel once again makes a beeline for the finish line and succeeds to make his 5th stage finish at this year’s Tour De France. Kittel has now won more stages than any one rider in a single Tour de France since Mark Cavendish's haul of five back in 2011. Eight is the most that any one rider has won in a single Tour de France, with just three riders achieving that! Chris Froome finished safely with the Peloton to retain the Yellow Jersey at the end of another day of racing.

Day 13 of the Tour De France entailed a 214.5 kilometre race from Pau to Peryagudes. The day’s ride was an exhilarating dash to, and through mountainous terrains. The biggest question of the day was whether Chris Froome would hold onto the Yellow Jersey with a mere 18 second lead over Aru. A noteworthy milestone- the day saw the riders cross the 2000 kilometre mark. The peloton kept a steady pace of around 48 kilometres an hour for the first 100 odd kilometres. The day’s massive climb was The Col de Menté which was a 6.9 km ascent with an average gradient of 8.1%, which split the Peloton up significantly, as riders struggled up the steep climb. This wasn’t hard in comparison to the last leg of the day where the riders had a staggering climb towards the finish line. In an exciting finish, Bardet won the stage’s race and Fabio Aru, Team Astana, took the Yellow Jersey from Chris Froome - who faltered on the steep climb towards the finish at Peryagudes.

Day 14 of the race entailed a 101 kilometre route from Saint Girons to Foix with three first category climbs, including the Mur de Péguère – a fierce ascent that featured gradients of up to 18 per cent! Riders were cautioned to use lighter bikes, but the minimum weight limit was still at the 6.8kg mark. After a tough day of intense climbing and riding Warren Barguil (Sunweb) won stage 13 of the Tour de France in Foix. A gripping afternoon of Bastille Day racing in the Pyrenees! Fabio Aru (Astana) retained his yellow jersey but saw Chris Froome's Sky teammate Mikel Landa add himself to the list of contenders for final overall victory! How about that?

Day 15 of the race entailed a 181.5 kilometre route from Blagnac to Rodez. After two tough days in the mountains, today’s race was relatively relaxed with a chance for the breakaways to keep their lead all the way. This wasn’t meant to be a day for the GC men but the final kick to the line was not easy. The final being a 570m kick up with the top of the climb at 9.7 per cent. The day’s race was well paced with the breakaway riders maintaining a decent lead up until the last leg of the race. With 7km to go, the break gap was reduced to 5 seconds with riders vying for the finish. The climb at the finish really changed the standings… The end of the day saw Matthews emerge victorious in this stage. Shocker of the say, Aru fumbled up towards the end, and made way for Chris Froome to get back into the Yellow Jersey, once again. Aru started the stage with a 6 second lead over Froome. It's been reversed and more. What a gift for Team Sky. What a day this was.

Day 16 of the race entailed a 189.5 kilometre route from Laissac-Severac L’Eglise to Le Puy en Velay. The stage took on the Massif Central with a lot of climbing, and a great portion of it spent above an altitude of 1000m. Chris Froome and Team Sky had a brief few moments of panic as the race leader was caught out by an attack from AG2R La Mondiale before the day's main climb with 40km to go and, to make matters worse, he then had to stop to swap a rear wheel with teammate Michal Kwiatkowski. As AG2R continued to drive the pace, Froome chased with Mikel Nieve and Sergio Henao, making contact just before the top of the climb with the help of Mikel Landa, who dropped back briefly from the group ahead, and retained his yellow jersey. The end of the day saw Bauke Mollema win his first Tour de France stage, soloing into Le-Puy-en-Valey after a turbulent stage. The Trek-Segafredo rider attacked the day's 28-rider breakaway on the descent with 29km to go, and held off a concerted four-man chase. 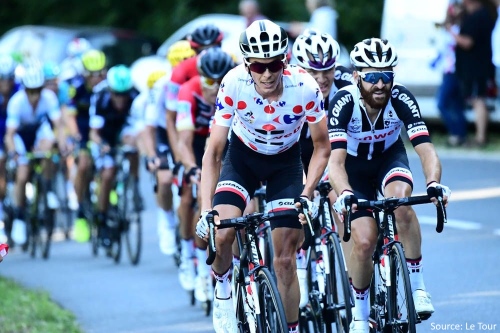 With the intensity as high as the last six days of this week’s race, day 17 of the Tour De France is a much-need, well deserved rest day. And as always, stay tuned for next week’s update on the race – with an excitement packed week. The final leg of the race, leading up to Paris, begins tomorrow!