Catching up with the Tour De France 2017

Catching up with the Tour De France 2017 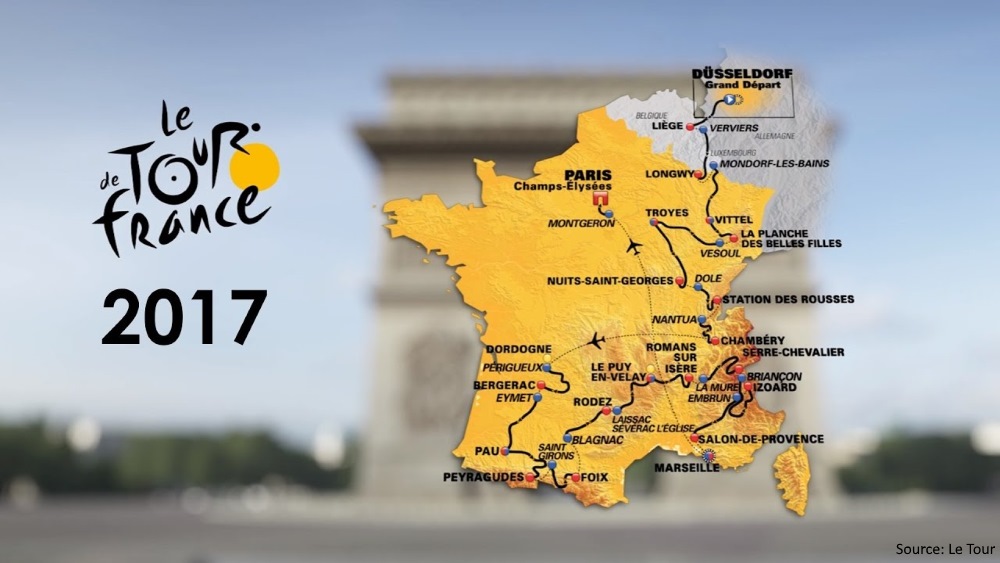 One of the most anticipated cycling events of the year – The Tour De France, commenced its 104th Edition on the 1st of July 2017. This year’s event saw the participation of a grand total of 198 riders from 22 teams. This year’s 3,540 km long race commenced in Germany, to proceed into Belgium and then enter France, finishing off with the Champs Elysees stage on the 23rd of July 2017.

The first day of the Tour De France commencing at Düsseldorf entailed a 14km time trial run in the region. The days event was off to a late start owing to bad weather, and the time-trial eventually took place in the rain. This, however, led to several crashes during the 14-km time trial. The end of the day saw Geraint Thomas, from Team Sky, emerge victorious with an overall timing of 16:04, followed by Stefan Kung from team BMC at 16:05, and former world champion, Vasil Kiryienka, from team Sky at 16:07.

Day 2 of the race entailed the riders covering 203.5 km, from Düsseldorf in Germany to Liège in Belgium. Suffering serious injuries from a crash in the previous stage, riders Alejandro Valverde (Movistar) and Ion Izagirre (Bahrain Merida) could not ride this stage, and hence are out of the running. A crash with 29 km to go saw many riders of Team Sky go down, only to catch up with the peloton in the final stages of the day’s race. The end of the day saw Marcel Kittel (Quick Step Floors) claim his 10th Tour De France stage victory, being the first across the finish line in Liège. Arnaud Démare (FDJ) was second and André Greipel (Lotto Soudal) third. Finishing safely in the peloton, Team Sky’s Geraint Thomas retained the race leader's yellow jersey, however a ten-second stage winner's time bonus moved Kittel to third overall and within the reach of the acclaimed yellow jersey. 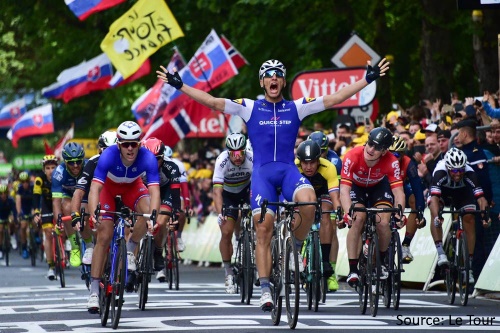 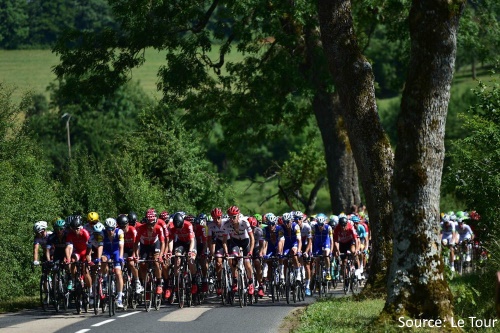 Day 3 of the race entailed a 212.5 km route, with the riders entering France through Luxembourg in the final stages of the day’s race. The days route involved 4 massive climbs spread through-out the 212.5 km ridden. The toughest climb on the days route was the Côte d'Eschdorf. A 2.3km long ascent with an average gradient of 9.3%. The end of the day’s race saw Peter Sagan pedal incredibly to his 8th Tour De France stage victory, despite having had to clip back in just as he started his sprint to victory. He was followed by Daniel Matthews (Sun Web) and Dan Martin (Quick Step Floors). Geraint Thomas (Sky) held on to his lead and the yellow jersey, while Chris Froome (Sky) moved up to second, at 12 seconds. Matthews drove himself to third, also at 12 seconds, and Sagan moved up to fourth, one additional second down.

Day 4 of the race entailed a 207.5 km route, which was predominantly flat. Rider Van Keirsbulck started out strong, being able to maintain a 10-minute lead from the Peloton for almost 50% of the route. The gap started diminishing as the headwinds became stronger and riders from the Peloton began to catch up to him. With 16 km remaining Van Keirsbulck lost his lead as the peloton caught up as he drifted to the end of it. He gave indications that he was cooked, and done for the day – his solitary reward, a KOM on the route. The last two km of the race saw riders sprinting for the finish line, resulting in two crashes, Geraint Thomas and Cavendish. Anaud Demare (FDJ) won a hectic sprint into Vittel to take his first win at the Tour de France. The shocker of the days race though, was Peter Sagan being disqualified from the Tour De France for sparking the crash that sent Cavendish down.

Day 5 of the race entailed a 160.5 km route from Vittel to La Planche des Billes Filles. The day started on a note of tension following Peter Sagan’s disqualification, and Mark Cavendish’s injury forcing him to drop out of the race. The days race saw a steady gap varying between 2 and 5 minutes, maintained between the leading riders from various teams and the peloton – up until the very end. The end of the race day saw Fabio Aru (Astana) claim his first Tour De France stage victory with an extraordinary performance at La Planche des Belles Filles. Additionally, Chris Froome (Sky) returned to the place of his first Tour Stage win, only to take the yellow jersey of overall leader, this time around.

Day 6 of the race involved a 216-km route from Visoul to Troyes. This stage had 193 riders continuing in the race. This stage entailed classic rolling French roads, as the riders headed north-west towards Troyes. The days race involved cross winds, and more frustratingly - high temperatures of 30 degrees and above. The end of the race day saw a high-powered sprint 2km from the finish, with Marcel Kittel (Quick Step floors) sprinting his way to his second stage victory in this year’s Tour De France. Chris Froome finished with the peloton, retaining his yellow jersey. 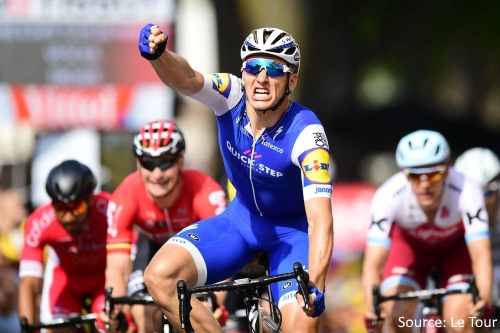 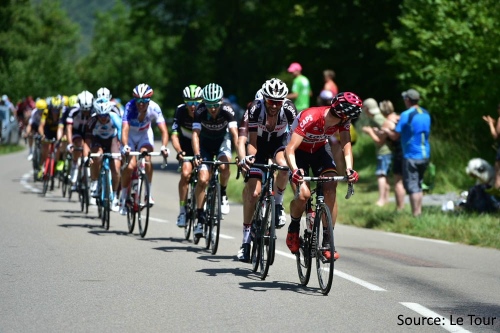 Day 7 of the race involves a 213.5 km route from Troyes to Nuits Saint Georges. The riders were all set to face the bellowing heat of 30 degree upwards, with a ray of hope being predicted tail winds at 15 km/h. The days race started out with an average of a 2:30 gap between the front riders and the peloton. A crash just past the feed zone sent a few riders to the doctor vehicles mid-race, nothing major though. With 40 km to go, the peloton closed the gap to the 1:00 mark. The end of the day saw an exciting sprint in the last kilometre with a close race between Marcel Kittel and Boasson Hagen, with Kittel winning the stage race by 1/100th of a second, to gain his 3rd stage victory in the Tour De France 2017! Once again, Chris Froome finished with the peloton, retaining his yellow jersey.

Day 8 of the race entailed a comparatively shorter distance of 187.5 km, from Dole to Station des Rousses. Though a shorter distance, this was the first day of mountain racing with some massive climbs set to challenge the riders, after a sprint-friendly opening week. The first 28km of the stage had flat roads, followed by mountainous terrain. Team Sky maintained a strong hold on all the climbs across this stage. Lilian Calmejane (Direct Energie) claimed his first Tour de France stage win in stage 8, surviving out of a large breakaway on a blazing fast mountain stage. Robert Gesink (LottoNL-Jumbo) gave chase but could not manage to close the gap, and came in second place 37 seconds later. Guillaume Martin of Wanty Groupe-Gobert led the peloton across at 50 seconds. Yet again, Chris Froome finished with the peloton, retaining his yellow jersey.

Day 9 of the race entailed a 181.5 km route from Nantua to Chambery. This stage was probably one of the most exciting and critical days of this year's Tour. Why? Well, 181.5 kilometres, seven categorised climbs and more than 5000 metres of altitude gain! The beginning of the race saw a few riders out owing to injuries. Another crash on a descent saw Sky’s Geraint Thomas down with a couple other riders. The crash injured Geraint Thomas enough for him to need to abandon the race and head to a hospital. The last 30 km of the days race saw some massive attacks from Aru, Froome, Martin, Porte and other riders. In a huge crash minutes later, Porte and Martin went down. The end of the day saw Rigoberto Urán (Cannondale-Drapac) claim stage 9 of the Tour de France in a photo finish ahead of Team Sun web’s Warren Barguil. Chris Froome holds on to the yellow jersey with team mates Thomas and Porte out of the running. 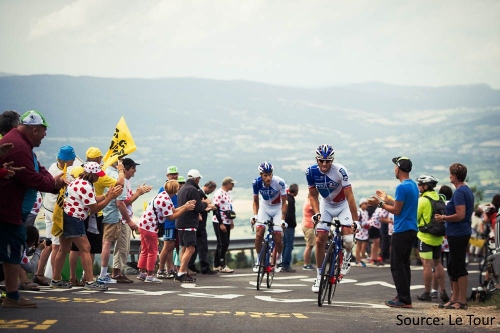 Day 10 of the race is a rest day, and we will come back with summarized coverage of the Tour De France, 2017 at the end of this week.