In a year, from Amateur to Pro

Home > World of cycling > In a year, from Amateur to Pro
Back

In a year, from Amateur to Pro 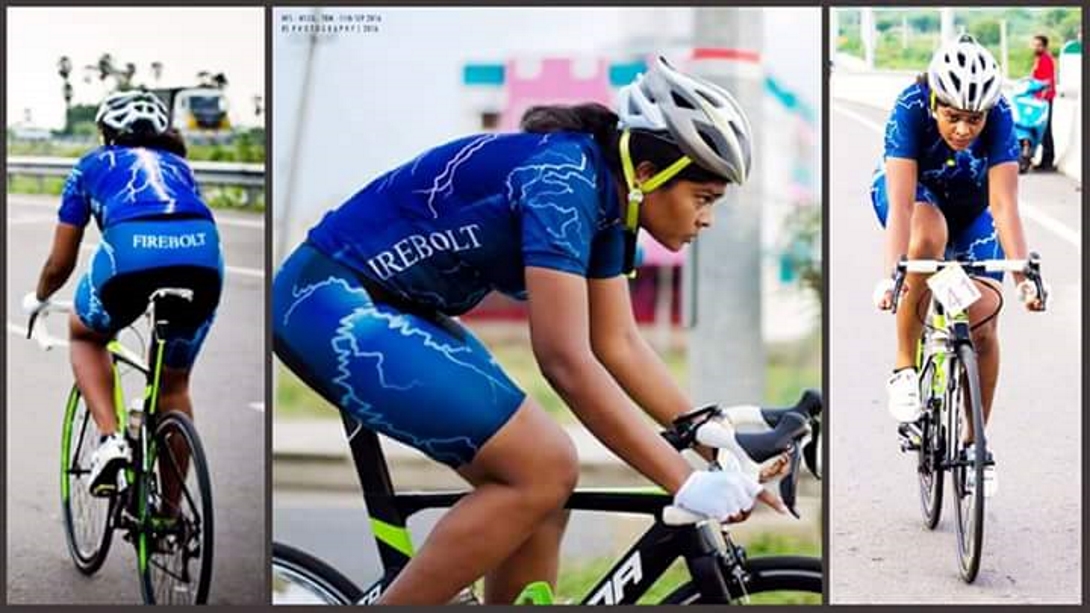 Lakshmi Thangadurai, a 23 year old Engineering graduate from Chennai whose life changed in ways unimaginable when she decided to take a year off to prepare for her GATE exams.  Being passionate about jewellery, she started an online business where sells terracotta jewellery that she makes.

Her 23rd birthday introduced her to a new realm of life – the world of cycling.  Having being gifted a cycle, she began pedaling with the intention to lose weight and stay healthy.  However, as days passed her passion for cycling bloomed and she started riding regularly, by herself initially and then with a cycling group – WCCG.

Today – a year and a half later, having won a state meet held in Ramanathapuram earlier this month, she is going to be representing Tamil Nadu in the nationals being held in Uttar Pradesh this November.  We got a chance to talk to this super star, and here is what she had to say.

Q. What made you get into cycling, and for how long have you been at it?

Since I decided to take a year off after college and work from home, I had quite a lot of time on my hands. Staying on the East Coast Road, I would often see lots of cyclists zipping by which inspired me to buy my first cycle. I got a hybrid for my 23rd birthday in July 2015, and that's when my journey as a cyclist started.

Q. Have you taken part in any other races? If so, what were they and how did they go?

Tamil Nadu Cycling Club conducts time trials once every two months, in Chennai. I have taken part in them and have finished at the podium. Some other podium finishes of mine include the G3 and Mongrels Duathlons as well as WCCG's Individual Time Trials.  These events have boosted by confidence.

Q. What inspired you to take up cycling seriously, as a sport?

During one of WCCGS's sessions, I happened to meet Gratian Mathew Govias. Being interested in long distance cycling and brevets, I decided to seek advice from him. It was he who suggested that I try racing as I am in the right age bracket, and started coaching me for the same.

I started training regularly with him and as days passed, my riding improved and my speed increased. Had I not met Gratian Sir, I definitely would not have taken cycling as seriously.

Q. Five years ago, what would you have thought about cycling as a sport? And was it something that interested you?

Forget five years, even up to two years ago, I knew nothing about cycling or cycles. I have watched cycling events on television, but that's about it. I would have never thought that I would get into cycling someday.

Q. Have you faced any obstacles so far?

Not really. I have got all the support needed.

Q. What was the hardest part of getting to the state meet, and during the races?

The state meet was a new experience all together. I have never heard of or seen some of the events conducted there. The track events took place on mud tracks. I had the opportunity to participate in a team time trial conducted on the track, and even won a silver medal for it. It was quite a different experience. The track events required that we rode a fixie only.

Q. How has your journey as a cyclist been so far, having gone from an amateur to excelling at it as a sport?

I have been training with Gratian Sir for the last eight months. This has improved my fitness level to a great extent. Earlier, completing a 100 km ride felt like a huge accomplishment but now, I complete at least three 100 km rides a week.

Q. How has support from your family and friends played a role in your cycling journey?

My family has been a huge support. None of this would have been possible without their unending encouragement and support. My co-cyclists from WCCG have been encouraging and supportive, and my friends are proud to see how I have grown.

Q. What has your training been like, so far?

Training with Gratian Sir has been a huge advantage to me. For the last three months I have been training hard for eight hours a day. Earlier, I used to train for an hour to an hour and a half in the mornings.

Q. What are your thoughts on the upcoming nationals?

I know it is going to be a tough nut to crack. But, I am training hard and I believe I will be able to do well.

Team ChooseMyBicycle wishes Lakshmi all the very best for the nationals. May you do well and come out with flying colours.